Imagine that you are walking down the street on vacation in Mexico. You see food street vendors all around and you’re wondering what is going to be the most delicious option. Then, you see a vendor shucking corn, drizzling lime, crema, and cheese over the top. Upon taking a bite you realize you have a new favorite food – elote, or Mexican-style street corn!

Elote is one of the most beloved street foods to make its way across the US. It is a light and healthy snack, perfect for watching a ball game, eating on a stick, or just enjoying the summer weather. Since elote is so yummy, we decided it is only right to create a pizza that tastes like elote. We introduce to you our Mexican Street Corn Pizza, AKA Elote Pizza! Let’s get into how to make this decadent, yet light pizza pie.

Elote is a dish made of roasted corn, salt, chile powder, cilantro, butter, cotija cheese, lime juice, and crema or mayonnaise. The word elote comes from the Nahuatl word elotitutl, which means a “tender cob.” Corn has been a staple in Latin American’s diets for centuries, as it was one of their main crops throughout history.

Since corn was indigenous peoples’ most abundant crop, many folks would sell corn dressed in lime juice right outside their fields to celebrate the harvest. Later on, street vendors would begin selling corn dressed in lime, mayo, and cheese. The popularity of this street food took off because of how easy it is to eat on the go.

Today, you can find elote all over Latin America, as well as in the United States at baseball games, state fairs, and many backyard BBQs. The ease and convenience of this dish are unparalleled. Not only that, but the flavor of elote is so great, that it’s no wonder it has become one of the most popular summer dishes in North America.

How Do You Make Elote?

Making elote is very simple because rarely do folks deviate from the original recipe. The flavors blend so well; the tart lime with the creamy crema, the crunchy corn with the soft cheese. The herbaceous punch from cilantro. The spicy chile pepper and the fatty butter. Everything is so perfect, and many of the ingredients you likely already have in your pantry!

First, to make elote, you’ll want to grill your corn over direct heat. This will give it char marks and add tons of flavor to the dish. Once cooked, you can either leave the corn on its cob or cut it into a bowl before topping it with ingredients. Then, top with crema or mayonnaise, lime juice, salt, butter, chile pepper, and cotija, and top it all off with some cilantro.

Leave any ingredients that you do not enjoy off of your elote. Don’t like cilantro? No problem! Need less spice? Use a less spicy chile powder or paprika instead! Don’t have time to grill your corn? No biggie! Keeping a loose adaptation of this classic elote recipe will still capture the simplicity and deliciousness of this dish.

Why Put Elote on Pizza?

Fresh ingredients always work well on pizza. Pizza is so adaptive that you can put anything you like on top and it will always taste good. However, you should make Elote Pizza because it is the most perfect pizza pie for summertime!

Elote is the ultimate backyard BBQ side dish, so we would be doing it a disservice if we DIDN’T turn elote into pizza. While you are enjoying all your summer foods, it is important to try new things to evolve your pizza making to the next level. With all that said, crunchy corn on top of pizza is a delicacy that everyone should try once!

While there are tons of different crust recipes out there for pizza, we recommend using Neapolitan pizza dough for Elote Pizza, much like this recipe here. A Neapolitan dough is great because it is a cold fermented dough. This means you assemble the dough with slightly less yeast, allow the dough to sit overnight in the fridge, and by the next day, it will have risen nicely.

The other reason we love Neapolitan dough is for its flavor. From the 24-hour cold fermentation, an umami flavor is produced within the dough. Fermentation means lots of flavors, usually by way of funk. The funkier your dough tastes, the longer it has been fermented. This type of dough only enhances the Elote Pizza experience.

Of course, you can also use any dough you like for this Elote Pizza. We also recommend NY-style crust or even Detroit-style. Any way you cut it, and no matter the dough used, this will be your favorite pizza of the entire summer.

Putting it All Together

To make this Elote Pizza the best you possibly can start with your fermented Neapolitan dough. Stretch it out thin to get it ready for toppings. Instead of pizza sauce, we use a lime crema mixture to line the pizza. This adds tons of creaminess and tartness as a base.

Next, we topped the crema with feta and mozzarella. The feta gives off the same vibe as the cotija and the mozzarella adds the pizza cheese element we need. Topping the cheese is some nicely charred grilled corn, which looks so beautiful on top of this pizza.

Lastly, we turned the chile and the cilantro elements into sauces for the pizza once it’s cooked. The cilantro sauce consists of cilantro, lime juice, garlic, EVOO, and salt and is drizzled beautifully over the top. The chile powder we mixed with Kewpie mayo (the best mayo ever!) for a spicy mayo topping. This sauce, again, gets drizzled over the top before serving.

Mexican Street Corn Pizza, AKA Elote Pizza, is the perfect homemade pizza pie for this summer. It has the freshest summer corn, lime crema, two kinds of cheese, and two sauces that everyone will absolutely love. Take note of street vendors; they often have the best food because it is made with love. Now, let’s get into this exact Elote Pizza recipe! 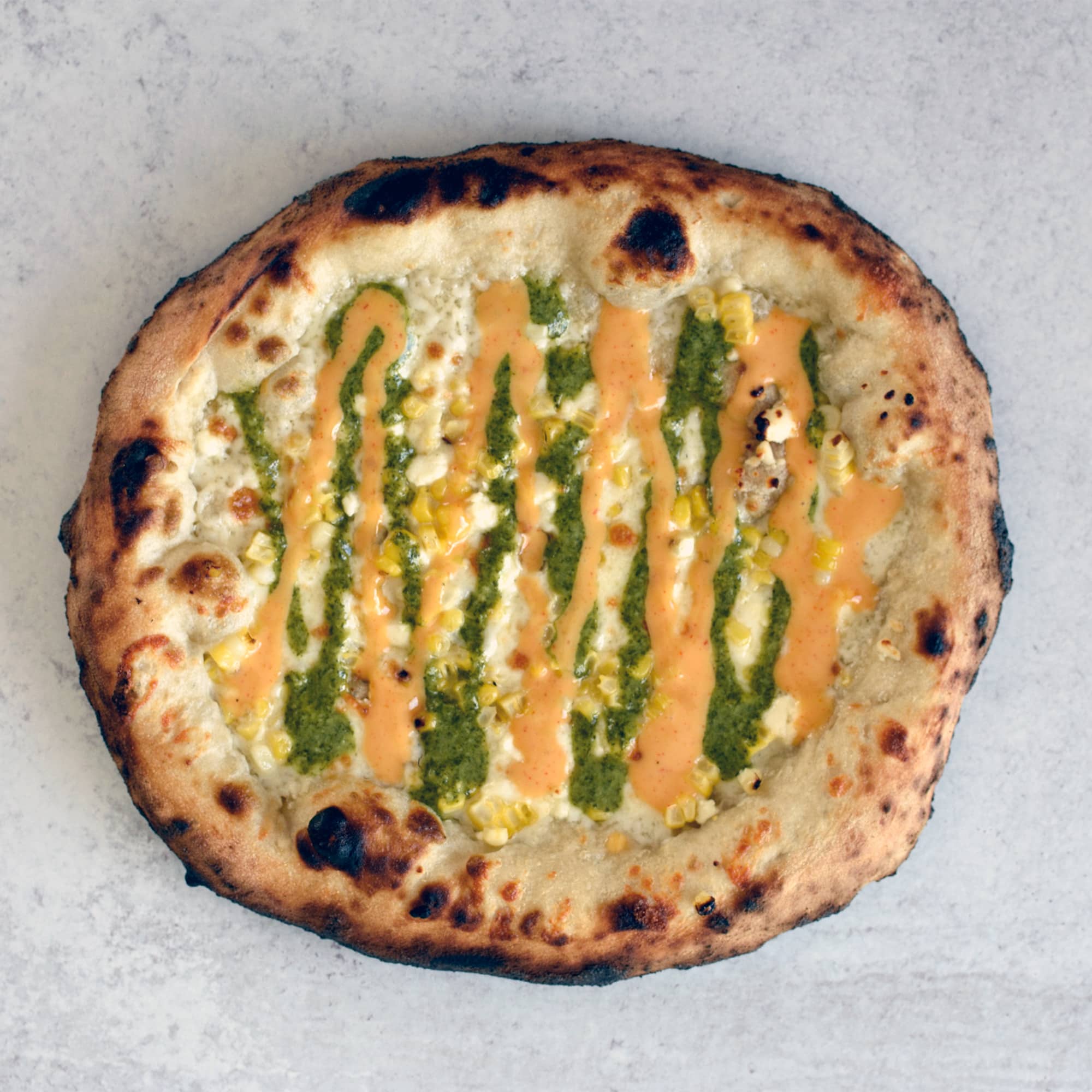 Believe it or not, corn is a very common topping on pizza around the world – except for the United States. What better way to introduce corn on pizza than with a Mexican street food staple that no normal human would refuse: elote. And all of the flavors work exceptionally well on pizza dough.
Print Recipe Pin Recipe Rate Recipe
Prep Time: 15 minutes
Cook Time: 2 minutes
Proof: 1 day
Pizza Style: Neapolitan
Oven Type: Outdoor Pizza Oven
Servings: 1 12″-13″ Pizza

This is a Neapolitan recipe that uses 00 flour, so high heat is a must; home ovens are insufficient. Be sure to preheat an outdoor pizza oven to 900F before cooking. If you only have a home oven and pizza steel/stone, check out our NY Style recipe which works great with this.
Tried this recipe?Let us know how it was!

Palapizza.com is a participant in the Amazon Services LLC Associates Program, an affiliate advertising program designed to provide a means for sites to earn advertising fees by advertising and linking to Amazon.com

Pala Pizza | The Backyard Pizza Experts
Back to Top
Close